I don’t even know where to begin. One of my dear friends said it best..WOW..yesterday we began the new year with the Annual Play For Jeter Memorial game and tailgate. This is the 6th year for the event and I’m still just as blown away as ever. The kindness and love they continue to pour over our family and Jeter’s Memory is unbelievable. I’m still shocked that even though none of the girls knew her they love and carry her memory and passion for the game as if they did. I work hard to keep her spirit and memory alive but only a bereaved parent can understand the beautiful gift it is to have others do it as well. This year they were able to play at Ellis Field (A&M’s soccer stadium) which I’m sure was a treat for the girls. The team has continued to showcase a “Play For Jeter” slogan on the sleeve of their team shirt they wear to school on Fridays since the 2013 season, but last night these girls had on a brand new maroon game jersey that also showcased “Play For Jeter” on the sleeve❤️This school, these coaches, these parents, these girls..they are teaching and learning something beyond winning and losing. They are learning compassion and how to love and care for someone else. That some how just kinda wraps up exactly who JETER was off the field. I am humbly grateful to everyone who stepped up to help organize this event. Coach Lockart and the other coaches, Chad Thompson with Morrison supply who helps sponsor the tailgate, Amanda Vaughan with Card My Yard for the amazing decorations, and all the amazing parents, the Dad’s who grilled the burgers and especially Jill and Gary Tomlinson who not only give their time to plan and organize the event but have included me and made me feel part of this soccer family. I am also thankful for everyone who comes to support us and the event especially my amazing friends who have made nearly every event the last 6 years, their sons have stood by and supported Cameron like true best friends. These beautiful people come not only to remember Jeter and support us but to support the Consol Lady Tiger soccer program. I am attaching some pictures and video and a tweet Jeter shared a little over 6 years ago❤️Thank you Consolidated Lady Tigers for having my girls back I’m positive she never thought it would be carried out quite like this. #PlayForJeter #missablekindofgirl #AMCladytigersoccer2019 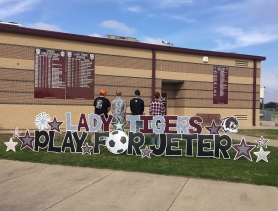 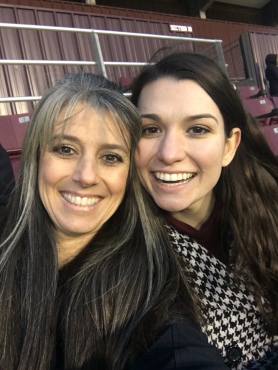 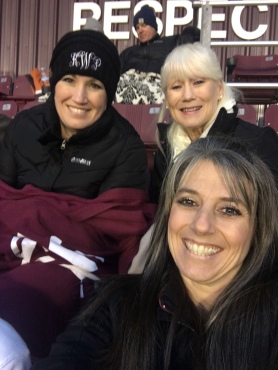 Sometimes I get tears in my eyes simply because I know the blessing it is to be able to watch Cameron play soccer. There simply aren’t words to describe how much I love and cherish every moment God gives me with him. I am so proud of his passion for the game and his desire to create opportunities to work on his weaknesses and continue growing as a player. As I already posted he choose to wear number 8 (his sister’s retired number) in honor of her. What many don’t know is t…hat Sydney’s high school number her freshman year was not 8 but 18, it changed to 8 her sophomore year and she also wore 18 her last competitive season so when the accident happened they asked me if we preferred to retire 8 or 18. We decided on 8 since it was her most recent number. When Cameron was asking me which number he should choose I told him it didn’t matter they are both special. He chose 8, however last week he stepped out on the field with number 18 when I saw him I couldn’t help but smile. It was a beautiful surprise. There is no greater feeling than watching him find ways to let her play with him and keep her a part of his life. I am in awe of the gifts God has given me and I am so grateful that he chose me to be their MOM. 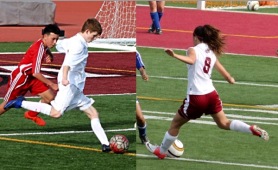 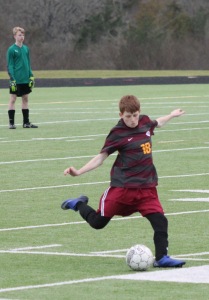 Sydney loved to love people and I know she would have taken the time to make sure everyone knew how much she loved and adored her Daddy.  Happy Fathers Day Stacy

Again…the soccer community goes above and beyond to walk beside our family..this time stepping in and on the field to play some soccer with Cameron..You see out of all the projects people have started “Play for Jeter” is one that Cameron has the desire and opportunity to pick up and be a part of..He has attended two Play for Jeter memorial games but has never had the opportunity to “Play” with her teammates and friends..I can’t think of a better way to support him then for some of her original teammates who started the project “Play For Jeter” and some of the young men that knew her, giving their time to step on the field and play soccer with him and a few of his teammates..What a beautiful gift it is for not only Sydney to have been a part of this soccer community but Cameron as well.  Much respect and appreciation for all of these people

I wanted to include the names of all the people who showed up to play with Cameron:

Her smile, her laughter, and her personality was so easy to capture through the camera..what a blessing!

Today is Mothers Day and I’m missing Sydney. She was the one that made me a mom..my first born. The day you become a mom your whole life changes. You look into your babies eyes and you know your soul and heart are linked. A mothers desire is for nothing more than to help their child succeed and become the best they can be..I would have given up anything for my child. I didn’t carry around 400 dollar purses, I didn’t wear expensive clothes, didn’t have the most expensive cars, but I lived life and made all kind of memories with my kids..Just like your life changes the day your baby is born..your life will also change the minute you hear your child is gone. All your future dreams are shattered. Every single perfect memory is always missing something..its missing my baby girl..and I can never be okay with that EVER..God blessed me with two amazing children..two..and I was so proud of Cameron yesterday. He played his last soccer tournament of the season. I won’t steal his words you can read them for yourself as I’m attaching his Instagram post..I just couldn’t be more proud of him and I’m so thankful for the heart he has..our family has changed, his momma cries all the time, his Dad cries, he has also learned how awful a few people can be, they have hurt him also..but he continues to try and be the best he can be..and I realize how lucky I am to have such a sweet caring boy..His post brought tears to my eyes! We miss you Sydney Lisa Jeter😇Always and forever! We will forever carry you with us! #PlayforJeter